To place a wholesale order, please send us an email to hola@poblanomexican.com.au or give us a
call on 03 9005 6637. We deliver to any restaurant or business within Australia 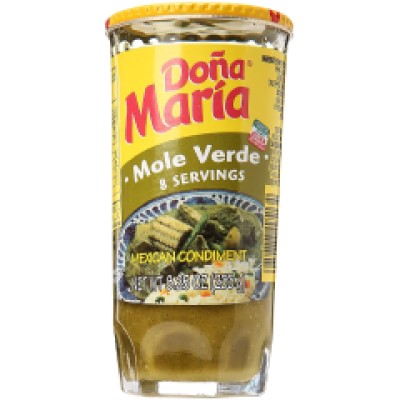 This Dona Maria Mole, has the right amount of spices, sedes, heat and chocolate but it also has chicken stock.

To make the traditional Chicken Mole, just add some paste to a heat pan, slowly add chicken stock till the paste is thin but still a bit firm.

Spread it on top of cooked chicken (boiled), add mexican rice and voila! Your mole is ready.Use it as a filling for tamales or for brunch to top your fried eggs, or if you want to be more adventurous, use it as a pizza base.

This sauce is popular in the central and southern regions of the country with those from Puebla and Oaxaca the best known, but simpler versions of mole poblano did make their way north. However, northern versions are far less complex and generally used to make enchiladas.The popularity of the sauce, especially at major celebrations, is such that 99% of all Mexicans have tried at least one version of it.

Mole poblano is the best known of all mole varieties and has been ranked as number one of “typical” Mexican dishes. It has also been called the “national dish” of Mexico. The state of Puebla is identified with mole poblano.

Mole poblano contains about 20 ingredients, including chili peppers and chocolate, which works to counteract the heat of the chili peppers,but it is not a chocolate sauce per se, as it is just one of the many ingredients and does not dominate. It helps give the sauce its dark color, but this is also done by the mulato peppers, as well.[4] This sauce is most often served over turkey at weddings, birthdays and baptisms, or at Christmas with rosemary over shrimp cakes.

Moles are pureed sauces that originated with the Aztecs, according to Zarela Martinez, author of “The Food and Life of Oaxaca.” They are based on dried chilies, toasted and ground with nuts or seeds that provide the thickening. They contain a variety of dried or fresh herbs and spices, as well as roasted tomatoes, tomatillos, onion, garlic, chocolate and fresh chilies. All the ingredients are prepared in an elaborate procedure to make a rich, thick, complex condiment used as a filling for tortillas or a sauce for prepared meat. Many Mexican home cooks use the ready made Dona Maria mole to speed up the process of making chicken mole.